Where Girls are Made to Do Bad Things...

Mari, is a model I shot while I was visiting Las Vegas back in 2009. She was genuinely surprised at how well my PROGRAM worked, that at the very end I turned her into a believer. This version has been remastered, and rendered in full 1080p HD format.. and includes never before seen scenes with another popular programmer from Vegas.. who's identity will remain secret... I hope you enjoy this new version of an old shoot... with new content.

Lost footage from one of my trips to Las Vegas, where I met Mari; a fresh faced brunette that agreed to participate in a training session. Here she is coming right out of the session, where I believe at this point of time; it worked wonderfully. Once she's up, I put her quickly back under and then instruct her that she will be stuck to the bed, and each time I snap my fingers she will feel something poking her in the ass. This works exceptionally well, as when she snaps out of it she can't get up! And she has no clue what is happening, and is getting super annoyed each time I snap my fingers. In addition to that, I freeze her a few times; re-posing her body and arms.. and when she is unfrozen she is shocked and wonders hard on how she ended up in a different position than what she recalls! She is clueless that its working so well! 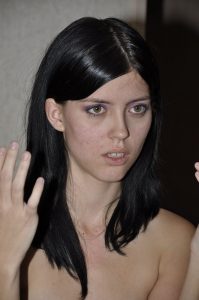 Mari is still stuck on the bed. And she feels something poking her in the ass. She's kind of clueless as to what is happening, so I explain to her that her brain is cluttered and I need to clean it in order to fix what is happening. So she agrees to let me remove her brain, clean it, and put it back. I perform the procedure, and when he brain is removed she is left brainless, unable to move see or hear... while she's in this state, I pose her a bit, and then put her brain back in backwards! Everything is completely opposite; and she attempts to rationalize it; but eventually agrees to let me fix it.

In this clip, Mari starts off still stuck on the sofa and her brain removed; but I place it back and then she is able to stand up and move off that sofa. But then I freeze her in place, and start removing her shirt exposing her bra, and jeans.... You can see the expression of total shock when she is unfrozen, and realizes her shirt is gone. Then I instruct her that each and everytime I snap my fingers she removes a piece of clothing; without knowing it till its gone! She starts off by removing her shoes, and then her jeans... all shocked, not realizing she's doing it to herself!!

Now, Mari is forced to remove her bra exposing her subtle yet small breasts; but she doesn't realize she's removing her bra by herself yet when its removed she is shocked cause she doesn't know what happened! You can see her expression of shock when this occurs!! Its quite interesting, and funny if you ask me. Then I ask her to show me her bra, and as she does so I freeze her in place and remove and hide it.. and then unfreeze her! She doesn't know where it went, and she blames a ghost on it!! So then I ask her to show me her jeans, and as she does; I freeze her in place and remove it and hide it; then unfreezing her - again to her surprise she thinks that ghost took her jeans... I had lots of fun messing with her in this clip

Here Mari is made to talk complete gibberish when I snap my finger and have no clue she is doing so, until after she talks. Enjoy her talking in nonsense, and then when I snap my fingers she realizes what happened and doesn't know why and gets so frustrated over it she starts acting out slightly.

First off, I attempt to get Mari to start cursing uncontrollably; but as in each person I work with - their reactions are always slightly different. It all depends on how their minds interpret what I tell them.. and this time, it definitely worked differently. Instead of cursing, she apparently got really mad at her friend that was watching... telling him off, and flipping him off... I was a bit worried that she would start getting into some personal details; so I quickly changed things around and tried something slightly different;made it so that when she spoke it comes out in song. Kinda turned this clip into sounding like a musical! But entertaining none the less. Finishing off with a freeze.

In this short yet simple clip, Mari is made to believe that everytime I snap my fingers everyone else in the room is naked instantly. Enjoy her frustration when this happens, as she doesn't really wanna see us naked!

In this clip, Mari is made to believe the lens in my camera is magical and it will start sucking her mind out of her body into the camera. Enjoy watching as Mari goes completely mindless as she starts to stare into my camera... and while she's gone, I pose her a bit, and then return her mind to her body...

In this clip, Mari is frozen in place and posed and moved around as I do a few camera pans around her topless body. Then she is put into a training state, and made to freeze but still be aware of what's happening, but can't stop it... as I pose her again, over and over in various ways making her look awkward.

Mari, is now made to faint instantly when I touch her on her shoulders. As we are talking, I randomly touch her and she passes out cold; and comes to in a few seconds - not knowing why she did that. I repeat this over and over in this clip to the point she thinks something is wrong with her!

Mari is now programmed to respond to the trigger word "BLANK" by turning into a complete blank slate. She forgets everything, including who she is, where she is, and what she is. But she instinctively will believe anything I tell her. I then say the word BLANK, and start making her believe she is a robot. A robot that was just turned on for the very first time, and as such she has various functions and features. First off, her belly button is her maintenance mode and tied with the pressure pads in her hands we can re-program her. And behind her neck, is her power button that shuts her off and on again.. also used to reset her when she malfunctions... Then we program her to do various things but her programming has a flaw in it, and she keeps malfucntioning slowing down and finally stopping entirely and crashing. We need to reset her to get her to work again....

In this final clipe of Mari, she is put under to remove all the trigger words and phrases and then when she wakes up she will still not fully recall what has happened until I shake her hand, then she will recall everything that happened... I perform a quick post-shoot interview, and we complete the set.

In this final clipe of Mari, she is put under to remove all the trigger words and phrases and then when she wakes up she will still not fully recall what has happened until I shake her hand, then she will recall everything that happened... I perform a quick post-shoot interview, and we complete the set.